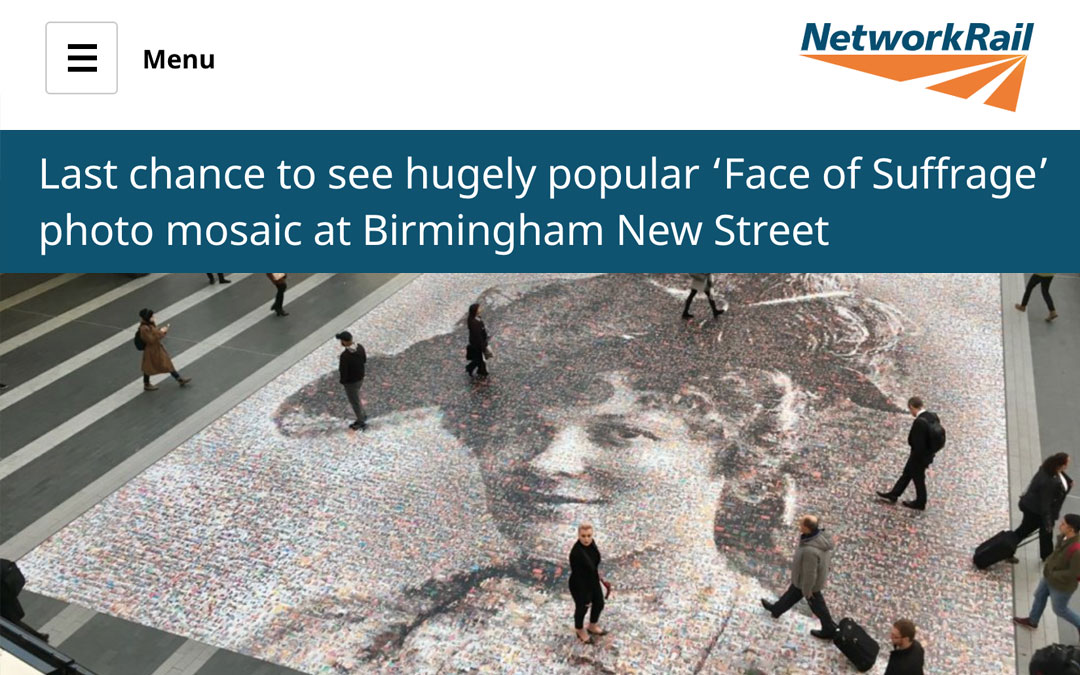 By the end of this week an estimated 5.4 million people will have passed through the station and had the chance to see the artwork during its four-week run.

However, after today (10 December) there are only four more days to see the impressive 200 metre-square installation in-situ before it’s removed overnight on Friday 14 December – exactly 100 years to the day since the 1918 general election which was the first time some women could vote.

When viewed from above, the mosaic – which is made up of more than 3,700 individual photographs – shows Hilda Burkitt from Wolverhampton. She was a leading face from the suffrage movement who campaigned for women’s rights a century ago.

Hilda threw a stone at Prime Minister Herbert Asquith’s train as it pulled out of Birmingham New Street after he attended a male only budget meeting in 1909, and she was arrested and forcibly fed at Winson Green prison.

Until this year very little was known publicly about her life, but the ‘Face of Suffrage’ mosaic has changed all that.

Karen Hornby, head of performance and customer relationship for Network Rail’s London North Western route, said: “Since its installation overnight on November 15, the positive response to the artwork has been huge and it’s been shared and liked thousands of times on social media. It has been an honour for Network Rail to host the ‘Face of Suffrage’, and for Birmingham New Street station to become the canvas for a piece of public art which has captivated countless people and raised the profile of Hilda Burkitt and her determined campaign for women’s rights.”

Helen Marshall, the artist behind the art work and from The People’s Picture, said: “This project has been a huge success. People travelled miles to see it and have shared their appreciation with countless selfies of themselves on the artwork. I am sad to let it go, and I hope it may find a new home in a different form so that Hilda’s legacy is enjoyed for years to come. It is hard to believe that it was only months ago I was still piecing together what I believed might be a modest tribute, but working together with all the amazing people and partnerships it will be sure to remain in our memories for years to come. Birmingham New Street has set a precedent to be the perfect location for contemporary public art”

People were invited to submit their own pictures of inspirational women from today to go alongside historical pictures of women from the West Midlands and nationwide in the early 1900s.

It has proved hugely popular with passengers during its four weeks in position; as well as the a huge response on social media, a number of spin-off events were also held for people to learn more about Hilda’s story and the Women’s Suffrage movement.