The Face of Suffrage Reviews 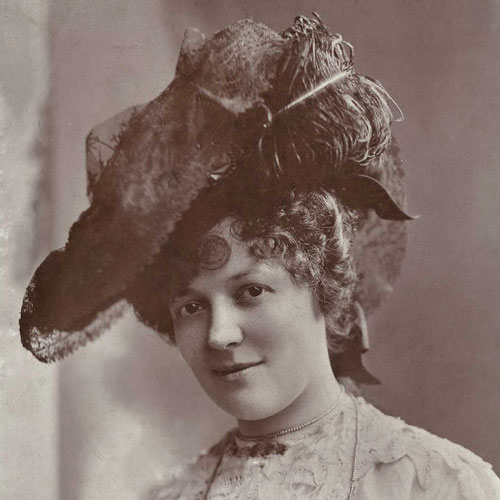 The Face of Suffrage

“She sits within a prison cell
Despised and splendid, great, defamed.
Shame close about her, and with all
Shameless and unashamed”.
Hilda Burkitt written in prison: Winson Green 1909 (1 month) and Holloway March 1912 (four months)

The Face of Suffrage celebrates the centenary of women over 30 gaining the right to vote in the UK and is composed of thousands of photographs tessellated to create a giant portrait of suffragist Hilda Burkitt (1876-1955). 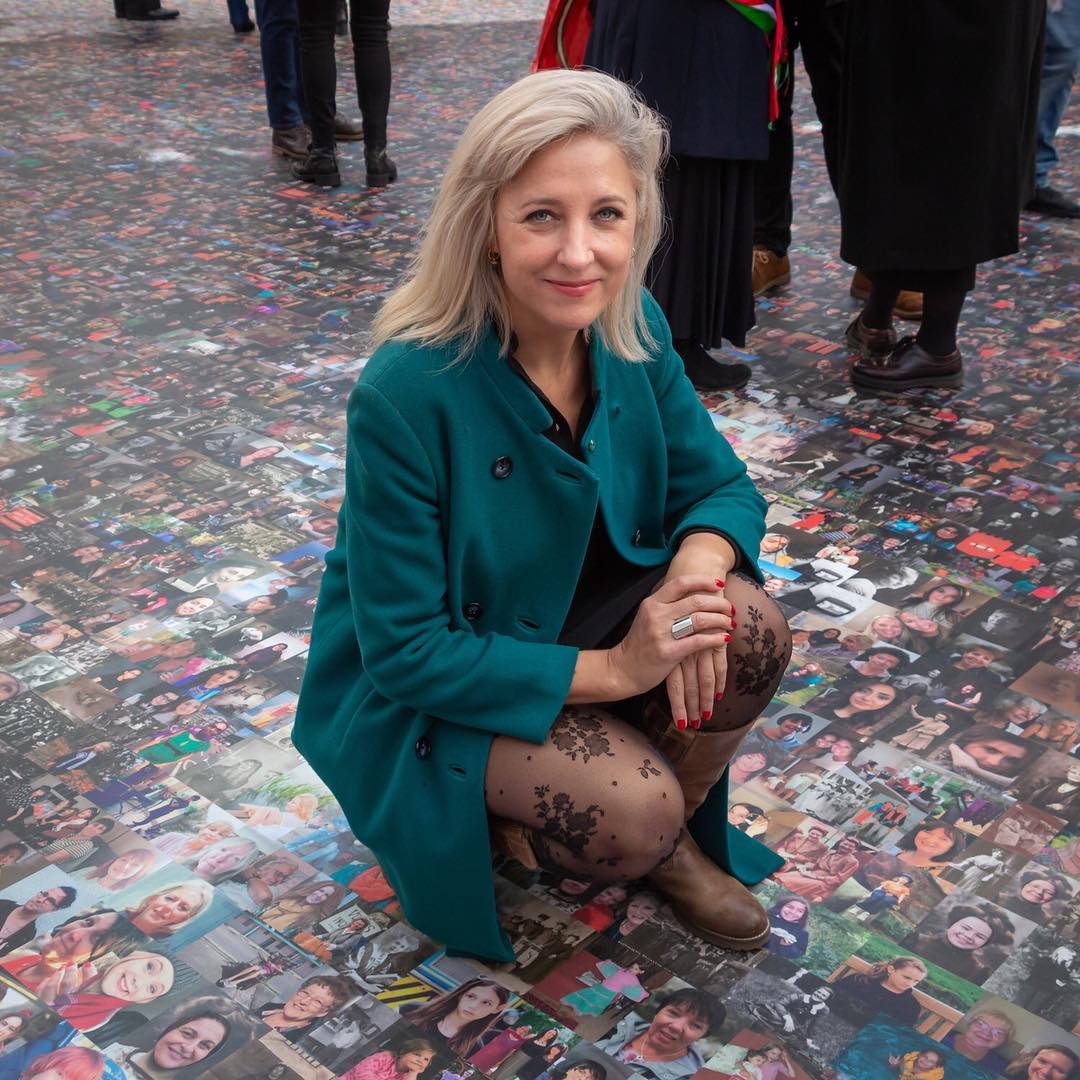 “Last year, I set up The People’s Picture, an art and design studio, where I work with a small, meticulous and caring team to tell people’s stories through photo mosaic installations. We partner with a myriad of people, organisations and public spaces often outside of the gallery, or institutional art space, to realise our projects. Popular, faces are featured as the emblems of our time following in the footsteps of historic mosaics that often included famous figures from history and mythology as well as lesser-known faces as my ethos is about inclusivity.

One of our latest projects is ‘The Face of Suffrage’ at Birmingham New Street. It is a floor-based, 200 metre-square photo mosaic revealing the face of a suffragette who has a ‘daring and brave’ story to tell. It is made up of more than 3,700 crowd-sourced photos and selfies of inspirational women and girls (who identify as female or non-binary), combined with hundreds of historical images drawn from archives and libraries and focused on women’s suffrage in the early 1900’s. The artwork commemorates 100 years of women’s right to vote and has a local and national reach from the West Midlands and beyond. 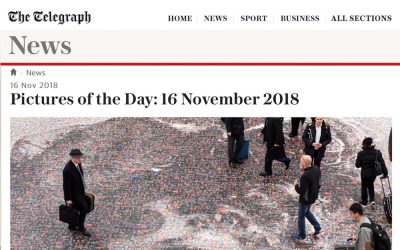 A giant 65ft mosaic portrait of militant Suffragette Hilda Burkitt has been unveiled in the atrium of Grand Central at Birmingham New Street Station. The mosaic is made up of 3,724 photos submitted by members of the public to create the Named face of... 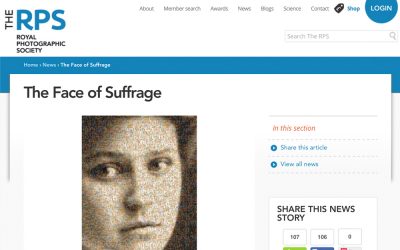 In 1918, after years of campaigning, women were granted the right to vote. One hundred years on, women and girls* across the region and beyond are invited to mark this historic moment as part of a living visual portrait of women in the 21st century. The... 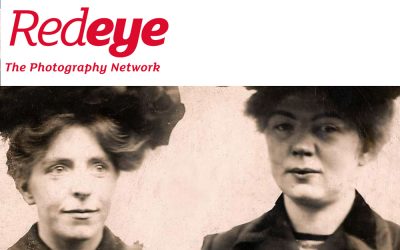 Birmingham New Street is to host a unique art installation which celebrates 100 years since women were first allowed to vote.The 'Face of Suffrage' artwork will be a floor-based, 200-metre square photo mosaic consisting of more than 3,500 images of females... 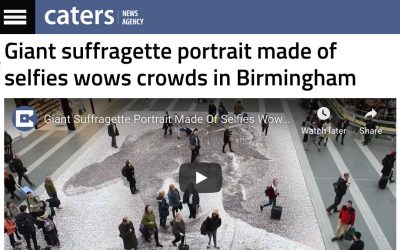 An impressive mosaic depicting the face of a suffragette created made by selfies and photographs of historical women from the 1900s, has been unveiled in the centre of Birmingham. Hilda Burkitt’s face has been turned into a 65ft piece of art on the floor... 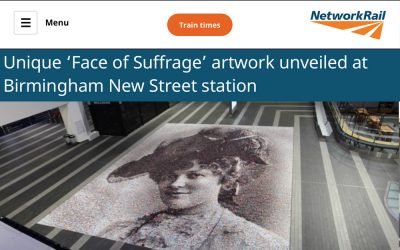 A stunning art installation marking 100 years since women were first given the right to vote has been unveiled at Birmingham New Street station.The ‘Face of Suffrage’ artwork, a floor-based, 200 metre-square photo mosaic, is made up of more than 3,700... 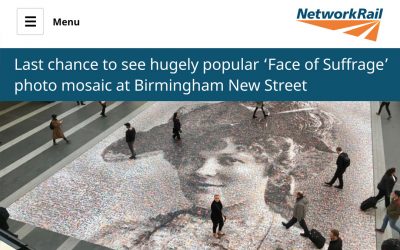 Passengers and visitors to Birmingham New Street station have just four days left to see the stunning ‘Face of Suffrage’ art installation.By the end of this week an estimated 5.4 million people will have passed through the station and had the chance to see... 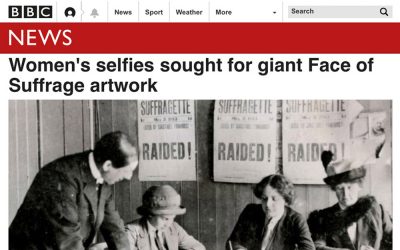 Photos of thousands of girls and women are to form a giant mosaic of a suffragette to mark 100 years since the first British women won the vote. Artist Helen Marshall called for selfies and photos of women in people's lives "you wish to celebrate" for the...

‘The Face of Suffrage’, at Birmingham New Street, is a floor-based 200 metre-square photo mosaic revealing the face of a Suffragette with a ‘daring and brave’ story to tell. It is made up of more than 3,700 photos of women and girls submitted by the... 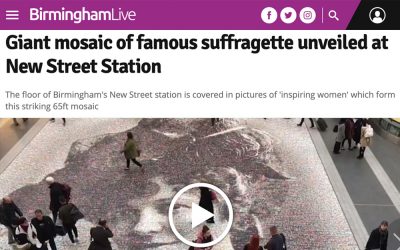 A giant mosaic of a famous suffragette has been unveiled inside Birmingham New Street station, metres from where she threw a stone at a former-Prime Minister's train.The 20m (65ft) portrait of Hilda Burkitt was painstakingly put together using 3,724 photos... 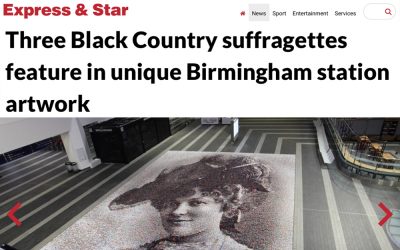 The floor-based 200 metre-square photo mosaic, the 'Face of Suffrage', is made up of more than 3,700 images of women.When the artwork is viewed from above, it shows Wolverhampton-born Hilda Burkitt – a leading face from the suffrage movement in the West... 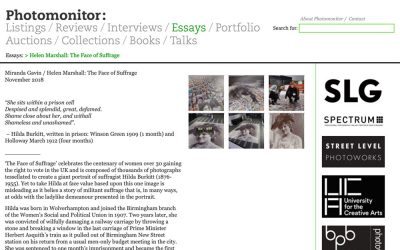 Miranda Gavin / Helen Marshall: The Face of SuffrageNovember 2018“She sits within a prison cellDespised and splendid, great, defamed.Shame close about her, and withallShameless and unashamed”. – Hilda Burkitt, written in prison: Winson Green 1909 (1 month)... 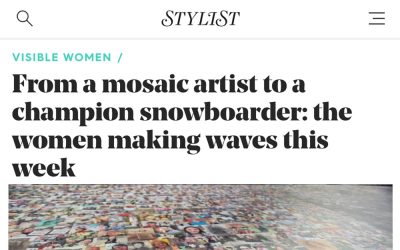 A mosaic of suffragette Hilda Burkett was unveiled at Birmingham New Street station on Thursday (15 November). Poetically located at the spot where Burkett threw a stone at Prime Minster Herbert Asquith’s train in 1909, the portrait is made up of 3,724... 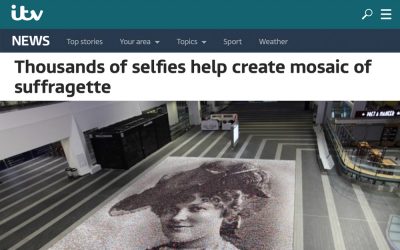 An art installation marking 100 years since women were given the vote has been unveiled at Birmingham New Street station.The floor-based artwork called "The Face of Suffrage" is made of a mosaic of more than 3,700 images of women from across the West... 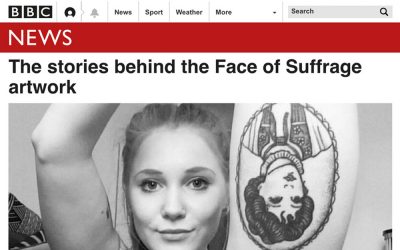 The stories behind the Face of Suffrage artwork | BBC | 2018

Thousands of photos will form a giant mosaic of a suffragette to mark 100 years since British women won the vote. Here are just some of the stories behind the pictures about to go on show. Illustrator Megan Price has such belief in the suffrage movement she has a... 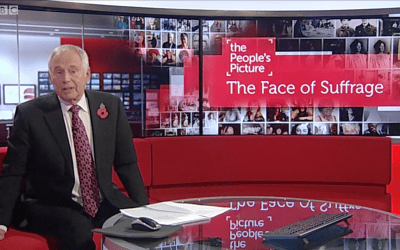 BBC Midlands Today "Calling all women and girls, time's running out if you want to be part of a giant mosaic that will be going up in New Street Station in Birmingham."Click the video below to watch the full story.

Back to The Face of Suffrage