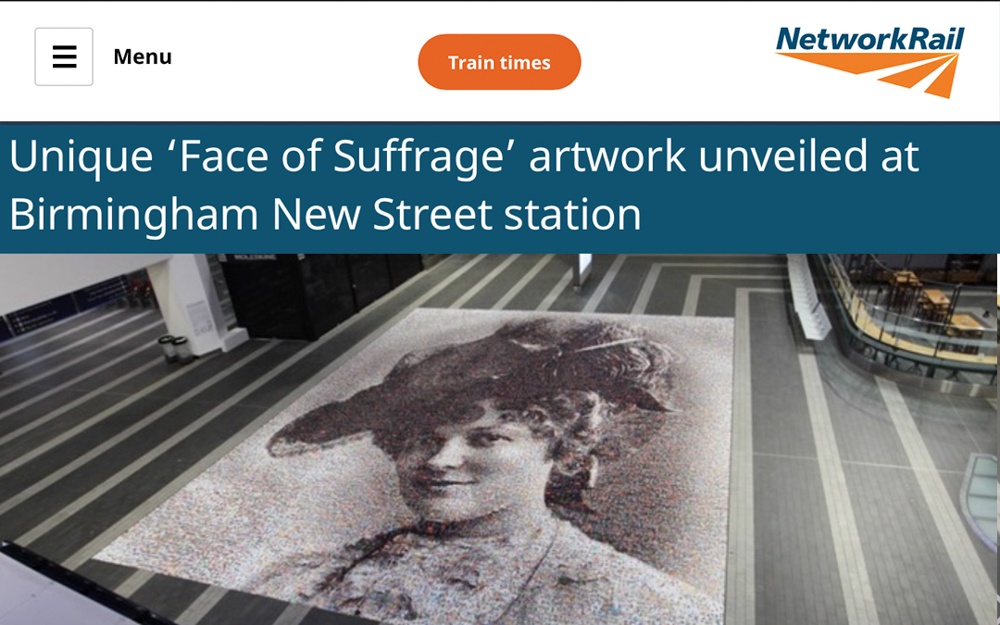 A stunning art installation marking 100 years since women were first given the right to vote has been unveiled at Birmingham New Street station.

The ‘Face of Suffrage’ artwork, a floor-based, 200 metre-square photo mosaic, is made up of more than 3,700 images of females from across the West Midlands and beyond.

When viewed from above it shows Hilda Burkitt, a leading face from the suffrage movement in the West Midlands.

Evelyn Hilda Burkitt was born in Wolverhampton in 1876, and died in 1955. She was the first suffragette to be forcibly fed a total of 292 times and worked at the Birmingham WSPU (Women’s Social and Political Union) headquarters, in Ethel Street, near New Street station.

Hilda threw a stone at Prime Minister Herbert Asquith’s train as it pulled out of Birmingham New Street after he attended a male only budget meeting and she was imprisoned at Winson Green prison.

The image is made up of a combination of historical pictures of women from the West Midlands in the early 1900s and of females today using photographs submitted by the public be part of the commemoration.

It was created by artist Helen Marshall, of the People’s Picture, who has installed similar projects across Britain marking other historic occasions.

Birmingham New Street, which has 170,000 passengers every day, was chosen as the location because of it’s large concourse which provides an ideal space to host and view the art work. The railway from Birmingham was also important in transporting people to London in support of the movement.

Women across the West Midlands submitted pictures that have been combined to form the image Karen Hornby, head of performance and customer relationship for Network Rail’s London North Western route, said: “Women from the West Midlands were vital to the suffragette movement and the railway played a key role in helping them travel to London to be part of it.

“That’s why Birmingham New Street is the ideal setting for this inspirational piece of art which we are proud to host.

“Equality is at the heart of our organisation and supporting women to be part of the exciting rail industry is key to us delivering a safe and reliable railway for passengers.”

Helen Marshall, the artist behind the art work and from The People’s Picture, said: “I really enjoyed creating this piece and I am indebted to the thousands of people who sent in their photos and those who helped me realise my original vision on a giant scale.

“The photo is the face of a smiling Edwardian lady, but her story is far from what we might expect.

“I spent some time researching women from the West Midlands involved in the fight for the women’s vote. Whilst all women have a daring and brave story to tell, Hilda’s was uniquely connected to the station and Birmingham. I felt a connection to the photo because she looks us right in the eye and we are reminded that what we take for granted today happened only yesterday. I hope people will learn something new and be inspired!”

The artwork will be on display until Friday 14 December – the day which marks the 100th anniversary of women voting for the first time.

There will be events taking place in Birmingham during the display period to celebrate it and learn more about women’s suffrage.